Right now, we’re all being called to stand with justice, fairness, truth and freedom. To stand with what frees us all, not a few, but us all. If one suffers, we all suffer.
Freedom is about equality, fairness, justice, truth and freedom. It does not favour a few over the majority, it is about all these for all.
Be careful that you stand for something that is oppressive, suppressive, takes away people’s rights, civil liberties and favours tyranny.
work for freedom, justice and truth. The heart knows when it sees it. Bad Karma is being apportioned right now, it is finding its rightful owner.
In the past, Karma was used in the wrong way, it was used to hurt, harm, oppress and suppress, now this is being made right.
Presently, we are being called to make clean, moral, equitable choices, we’re being called to come together as one human race and defeat those who have bad intentions.
The time is now.
Kiran G

Light is pouring in, hard and fast. Dark structures are falling apart. Those with bad intent are being dissolved, those with destructive actions are being obliterated from this earth.
The dark forces have controlled this earth for too long, they have tortured humanity, they have spread hatred amongst humanity against each other, through race, religion, background and skin colours. Everything has been used to divide and separate the human race into factions until it splintered away into smithereens of nothingness.
2020: the time when humanity awakens to the tyranny of control and oppression under the guise of divine light. A lot of dark forces are passing themselves as light, they infiltrate groups, places of worship, healing circles, pose as healers, lightworkers, shamans but are actually working for the dark agenda.
I met the darkest entity in 2009, when he posed as a healer, citing “love is my religion” every two minutes, learning about healing and shamanic practices to “heal” people, when really he was a dark entity, taking everything from those he met. The worst kind of person I have ever met, evil is the right word for him.
On the surface, he looked like he was the most light-filled person, underneath was a monstrosity, who cursed everyone who touched his path. Ruthless, destructive, riddled with issues and dis-eases, who was looking for healing from me. Of course, I was naive and fell into the trap, the mask was good, but then soon, it became apparent, that this person was no good, was using and abusing people, was not healing but actually, harming people under the guise of a healer, the worst of the worst kind that I have ever met.
Of course, nothing was going right into the person’s life, nothing. Home repossessed, broken relationships, no money, had plenty of accidents – life was giving him a fair share of karma (well, what we sow, we reap!)
Over the past few years, I realised who this person was and wanted nothing to do with him and then started the dark psychic attacks, spiritual attacks, mental telepathic attacks, dark occult use of energy to attack me!
That’s right. For some years I was very tolerant, because I believed in harm no one. But, this was taken as a weakness on my part. These attacks continued for many years, but, this entity was not strong enough or clever enough to attack me. It was like a fly annoying me, after all, I was the teacher who initiated him into so many courses and modalities of healing. He did not know he was dealing with his master. I am not divine people’s master, but dark forces’ master. For sure!
One day, I decided enough was enough and I decided to fight this monstrosity to defeat. It did not take long honestly, because I knew what I had to do with him. Remember, no one can defeat a light warrior. These souls have sold themselves a long time ago and are the fighter of evil forces, their knights, they are not that powerful, they may go into higher dimensions, but the divine is limitless, they are limited.
So, I want you the light ones to know, the age of enlightenment is here, darkness may have tortured you for a while, but they cannot defeat you, you are made of another material, they don’t know what we are made of, of something indestructible, they learn from us, the light ones and use our teachings against us, but we have learnt from them too, now we are using their platforms, teachings and lessons against them.
The divine has upgraded itself, from being too nice, to fighters of just causes, we believe in peace, freedom, justice, oneness, harmony, but we innerstand, these will not be achieved without a spiritual war. We are not waiting anymore for them to be rehabilitated, we have been conned for too long. Divine warriors are here, but we need each light warrior to take their place, in this spiritual fight, information manipulation, energetic oppression, humanity is under siege from dark forces that are ruling this planet. But, the victory of light is imminent. Have no doubt about it. We are clearing the dark forces from this earth and this universe.
Take your place and be counted.
Kiran G
Lightwarrior.

A published author x 5. * Healing Express Oracle Book. *Heal YourSELF Part 1. *Heal YourSELF with Self Love. *Heal YourSELF - Self Empowerment Oracle Cards; a 44-Deck Divination Card set. Mindfulness and Trauma Recovery Course - a 10 week programme. Academically, trained in the legal field. Postgraduate in International Relations and Globalisation. Post Graduate in Law LLM (Barrister Training). Post Graduate in Teaching (Lecturer). Graduate in Law (LLB). A lecturer working in Higher and Further Education. Also specialised in Disability and Special Educational Needs, this is the part where I give back to the world, in service to humanity. An online course provider on trauma recovery, self empowerment, mindfulness and metaphysics. A Reiki Master/Teacher. A healer with communication, words, writing, arts, colours and freedom of self expression. Public speaker - speaking and imparting important information to motivate and elevate others to be their best selves. Elevating humanity. A sculptor who makes functional art. Artistic Soul - I draw, paint and love life in colours. It's only the beginning! A limitless soul! Stick around, to find out more ... Kiran G

It's been a long walk, in the dark abyss of this world, however, this time around - I win! I use the tools of success that I have gathered to make my life the BEST it can be, success in mastering my mind, body and spirit.
I bring those tools to the world by bringing peace, respect, freedom, unity, transformation, happiness to the world.
Kiran G 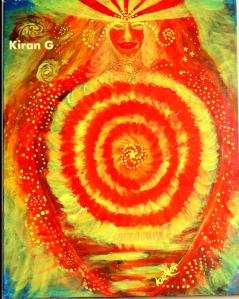 It’s no coincidence that you’re here. You’re here to make a difference, to make it happen, to change the world, to succeed this time around.  Let me tell you, this time you succeed.  No one, nothing can stop you, as you’re ready to make a big impact.  To bring peace, love and happiness to this world and your journey continues from here, I am here to make that journey a magical one!